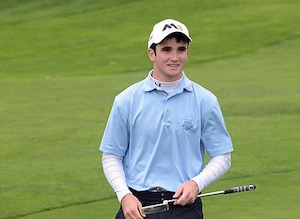 Connolly, a resident of San Francisco, defeated Noah Shiekh 3-and-1 in the 36-hole championship match hosted by TPC Harding Park. The win concluded a long month of golf for Connolly that began with rounds of 71, 76 to earn the 13th match play seed.

Several of those rounds required serious comebacks, and the final was no different.

The Stuart Hall high school senior found himself 2 down with three to play in his opening match against Bryan Baumgarten. Connolly rallied to force extra holes and matched Baumgarten’s three consecutive birdies on the first three playoff holes, eventually pulling out the match on the 22nd hole.

A 4&3 win over Aaron Chen in the round of 16 and and a 2-up win over Ben Peters in the semi’s further exemplified Connolly’s strong play. Although St. Patrick’s day is around the corner, the Irish Connolly certainly relied more on his golfing ability than Irish luck in his final match.

Once again down on a rainy San Francisco day, vs. the 6 foot 7 Noah Sheikh, Connolly squared the match, relying on his foul weather play and sheer determination to square the match, then pull ahead.

“It was pretty brutal out there,” Connolly told the San Francisco Chronicle. “But to me, it’s kind of cool; it’s what makes this event unique. You play no matter what.”

And having his father Martin, the owner of the most popular Irish bar and restaurant in San Francisco (Johnny Foley’s) on the bag surely didn’t hurt.

The elder Connolly, worn out from a weekend of caddying, called the weekend magical.

The family had a strong contingency of Irish golfers and friends in the gallery, including Kitt Flood, whose brother Ronan caddies for Padraig Harrington on the PGA Tour. Many of the gallery play just across Lake Merced at The Olympic Club, known for its Irish contingency of members. (Notably, Another Olympic Club member, Randy Haag, won the Senior Championship.)

Connolly won the match in fashion, with a downhill, 20 foot putt on the 35th hole, Harding Park’s par-3 17th.

The win the biggest in Daniel’s young amateur career that includes two U.S. Junior Amateur appearances. In 2013 he recorded a big win at the AmateurGolf.com Christmas Classic, where, at age 16, he shot a shocking 8-under 64 in the final round to grab the title against a field of collegiate players.

We’ve been paying attention ever since.

Look out for Connolly as he starts his freshman year at SMU this fall.